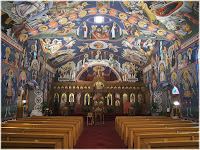 The renowned iconographer Leonid Ouspensky points out a noteworthy and apparently important aspect of Orthodox church design and its chief aim:

"In an Orthodox church, all efforts are aimed not at creating a place that calls for 'solitary meditation, a turning inward, a prolonged private conversation with one's own secrets' —but at including man in the catholic unity of the Church so that in its entirety, earthly and heavenly, it may acknowledge and praise God "with one mouth and one heart." - from Theology of the Icon, Volume II

So we see here Ouspensky notes that the main focus of Orthodox church architectural design is for the purposes of the Liturgy, the common worship of the people. (Perhaps from this stems the typical absence of the confessionals and the private devotional chapels featured within the church structures of Roman Catholic and Anglican traditions?) This focus on the common experience, or better put, the catholic unity, is something I have noticed in the worship of the Divine Liturgy.
Posted by Apophatically Speaking at 1:02 PM No comments:

Religion of the Book?

Some more thoughts on Sola Scriptura, and the notion of "the religion of the book."

"Christianity is not, properly speaking, a 'religion of the Book': it is a religion of the word (Parole)—but not uniquely nor principally of the word in written form. It is a religion of the Word (Verbe)—'not of a word, written and mute, but of a Word living and incarnate' (to quote St. Bernard). The Word of God is here and now, amongst us, 'which we have looked upon, and our hands have handled': the Word 'living and active', unique and personal, uniting and crystallizing all the words which bear it witness. Christianity is not 'the biblical religion': it is the religion of Jesus Christ." - Henry de Lubac.
Posted by Apophatically Speaking at 3:12 PM No comments: 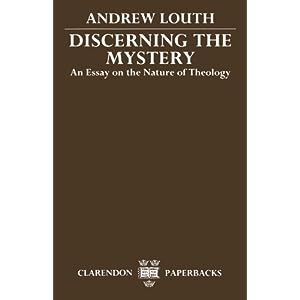 "the heart of Christianity is the mystery of Christ, and the Scriptures are important as they unfold to us that mystery, and not in and for themselves." - Andrew Louth

Louth here is not arguing that we should throw away our bibles, but rather that the interpretive principle of Sola Scriptura goes against tradition. From "Discerning the Mystery, an Essay on the Nature of Theology." The chapter on the "Recovery of Allegory" alone is worth the whole book.

One may be indifferent to the concept of Christianity as a Biblical Religion, or dismiss this as the obsession of ivory tower theologians (like, "who cares?"), however it is more important as it may at first appear. For classic Christianity the Scriptures are not the final arbiter, the all in all that interprets itself, the yardstick by which all else is measured. It is rather a treasury, understood and used within the community of believers, within a larger consensus of interpretation. Understood to stand on its own, interpreting itself, a la Sola Scriptura, it pushes aside the interpretation of the Fathers to favor an Enlightenment approach to truth, namely that truth can be found and understood independently from tradition. Christianity thus unanchored from the consensus patrum becomes something different altogether, its claims of being "biblical" notwithstanding.
Posted by Apophatically Speaking at 11:19 PM No comments:

Email ThisBlogThis!Share to TwitterShare to FacebookShare to Pinterest
Labels: sola scriptura, the word

Here's an image, a "visible" of human participation in the Divine, of cooperation, of union. But there is more than we can see in this image, there is the reality it points us towards, the "invisible".

the gaze to surpass itself by never freezing on a visible, since the visible only presents itself here in view of the invisible. The gaze can never rest or settle if it looks it on an icon; it always must rebound upon the invisible, in order to go back in it up the infinite stream of the invisible. In this sense, the icon makes visible only by giving rise to an infinite gaze." Jean-Luc Marion, "God Without Being"
Posted by Apophatically Speaking at 4:00 PM No comments:

To Be Divine In The Way That He Is Human

I ran across this great passage in which Fr. Behr in "Thinking Through Faith: New Perspectives from Orthodox Christian Scholars" takes an interesting and refreshing approach to previously well covered ground:

In one way or another, all the various heresies against which the Fathers fought attempted to dissolve the apparent paradox of Christ: what it is to be God through how he lived and died (or rather, died and lived, for his death enabled the disciples to understand what he did before) as a human being. The Docetists denied that he was truly human, claiming that he only appeared to be such. Arius denied that he was truly divine, for how could one who is as divine as the Father suffer in such a manner? Diodore, Theodore, and Nestorius, though affirming his full humanity in a manner palatable to today's taste, do so at the expense of separating his divinity from his humanity: Christ no longer shows us what it is to be divine in the way that he is human, and so we remain, once again, separated from God.

Is this at all meaningful to us, divinity in humanity, to be God through how he died and lived as a human being? If so, in what way? The "Divine as human" is what strikes me here.
Posted by Apophatically Speaking at 3:32 PM No comments:

Today, January 5, 2011, we are on the Eve of the Holy Theophany. This major feast is celebrated tonight and tomorrow. It is hard to understand for us, but it is considered a more important feast than Christmas (it is "ranked" only after Easter and Pentecost). This hymn explains it all:

When You, O Lord, were baptized in the Jordan,
the worship of the Trinity was made manifest.
For the voice of the Father bore witness to You,
calling You His Beloved Son;
and the Spirit in the form of a dove
confirmed the truthfulness of His word.
O Christ our God, You have revealed Yourself
and have enlightened the world, glory to You

What wonder, to look down in the river
and see the Maker of heaven and earth standing naked.
Like a servant at the hands of a servant
he accepts to be baptized for our salvation.
The choirs of angels are astounded,
overwhelmed with fear and joy.
With them we worship You; save us, O Lord!
Posted by Apophatically Speaking at 12:09 PM 3 comments:

Email ThisBlogThis!Share to TwitterShare to FacebookShare to Pinterest
Labels: theophany

OUR ENTIRE STRUGGLE in this life is aimed at discovering our 'deep heart' because that is the place where God manifests Himself. Above all, we aim to uproot the passion of pride within us, because this is the passion which buries the heart, leaving us feeling as if we no longer had a heart. 'Pride stops us from loving,' says St Silouan. Indeed, true love proceeds from humility, for the humble man has room in his heart for God and his fellow-men. As long as we are proud we will be separated from our heart; we will live only according to our little minds, totally missing the ultimate purpose of our coming into this life, and will end up as dry leaves blown about aimlessly by the wind. If, however, we succeed in finding our deep heart, then our mind will drop anchor not only in the heart, but also in the depths of heaven where our life is 'hid with Christ in God' . And God will come and make His abode in us.